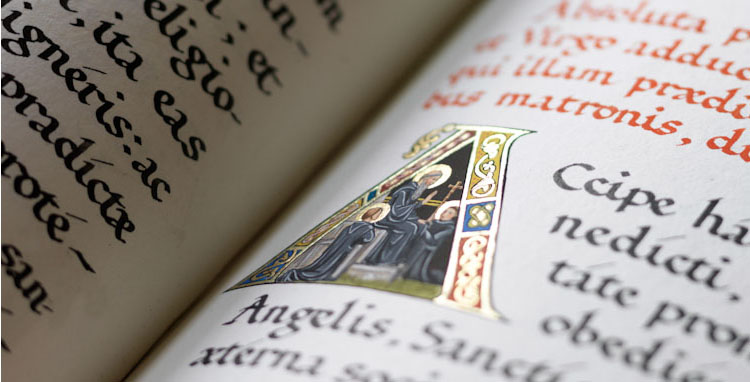 The Gospel for this Sunday finds us in the city of Nazareth, place of wonder and miracle. It is still said of Nazareth today ‘Can anything good come out of Nazareth’, and some pilgrims do not visit it because they feel there is nothing to see there. But there is everything to feel there, everything to remember. Jesus returned to Nazareth where He had grown up. The consequence of His sign in the synagogue was anger from its people and the attempt to kill Him. The brow of the hill chosen for this action is today called ‘The Hill of the Fright’ for it evoked intense fear in the Mother of Our Lord that the city turned against its Son with such vehemence and so swiftly. This return to Nazareth is the context for the underlying theme of this Sunday’s readings, which is the Word of God, and the contemplation of that Word. The Aramaic for ‘word’, transliterated ‘miltha‘ carries weight for it expresses what is impossible to render properly in English, but means something like ‘the effulgence of light, the mystery, the emanation of reality…’ To contemplate such divine ‘otherness’ is a gift, a grace, and is more about a still receptivity with the text, than anything we could ‘do’. In Nazareth, Our Lord ‘took the scroll’ to read, then handed it back, gave it, returned it, for He was the fulfillment, He was the Living Scroll, the Prophecy embodied, the Word Incarnate. To read Him who is the Word means essentially to be read by Him, to be read in His Presence and with love.

Several pages, including the Homepage, have Gregorian chant sung by the nuns. Look for the button at the extreme bottom right corner of the page which says ‘Click to play chant’. Chants will be changed from time to...

This website uses cookies to improve your experience while you navigate through the website. Out of these cookies, the cookies that are categorized as necessary are stored on your browser as they are essential for the working of basic functionalities of the website. We also use third-party cookies that help us analyze and understand how you use this website. These cookies will be stored in your browser only with your consent. You also have the option to opt-out of these cookies. But opting out of some of these cookies may have an effect on your browsing experience.
Necessary Always Enabled
Necessary cookies are absolutely essential for the website to function properly. This category only includes cookies that ensures basic functionalities and security features of the website. These cookies do not store any personal information.
Non-necessary
Any cookies that may not be particularly necessary for the website to function and is used specifically to collect user personal data via analytics, ads, other embedded contents are termed as non-necessary cookies. It is mandatory to procure user consent prior to running these cookies on your website.
SAVE & ACCEPT