One of Our Lady’s titles is Virgo fidelis.  The Annunciation is an event which reveals this fidelity.  She is already full of grace, favoured, says St Luke’s narrative, yet will she respond affirmatively to what is being asked of her here?  The very asking is both a recognition of her faithfulness hitherto and a proof of God’s trust in her future fidelity.  Fidelity to the truth permits one to respond to God’s plan.  We know this when we ourselves are called; evasion of the truth leads to a refusal of grace.  Mary evades nothing.  When her destiny as the Mother of God is offered to her through Gabriel, God’s intermediary, it must have seemed at the same time strange and familiar.  She never seeks, however, to bring the mystery down to her own level, to banalise it, make it more comprehensible.  Although she seeks to know how it could happen, she does not probe the mystery itself, but accepts it whole.  Trusting in the Father’s fidelity to her, she accepts what He has decreed; and in not attempting to “resolve the enigma of her own life”, she becomes ever more conformed to Him.  By her act of trust in something beyond human comprehension, she rises to her destiny.  She must then draw deeper on the well of her faithfulness, whose source was in God.  Her destiny is unique, vertiginous in human terms, demanding total transparency and confidence that it will be divinely protected.  In perfect place of soul, she utters her “yes” and will reiterate it in faithful action throughout her entire life.

Her first recorded action is to visit another faithful woman, Elizabeth, the mother of John the Baptist.  Here are two interwoven destinies: motherhood of sons, whose destinies also meet in fulfilment of God’s design.  In the event of the Visitation, we begin to see a deeper meaning to fidelity than simply faithful action, radical though that be.  In Jesus and Mary, there is a mutual abiding, the Son in the Mother, the Mother in the Son, who is also her creator.  We recall the Lord’s words in Jn 14:23: “If a man loves me, he will keep my word” (that is, if he is faithful to me).  “And my Father will love him, and we will come to him and make our home with him.”

Mary keeps the commandments; she, above all men and women, merits the indwelling of the Blessed Trinity.  The Second Person, made flesh in her womb, is the Vine, she the branch which must abide in Him, in order to bring forth fruit.  This fruit is Jesus Himself.  Thus the branch gives birth to the Vine.  For with God, testifies Gabriel, nothing is impossible.

With the birth of Jesus and His childhood, Mary is faithful to her maternal calling.  Her whole life is centred around the child.  This is the form fidelity takes, once Christ is taken into a life.  He is the focus of all we think and do.  Whatever the cost – even exile in Mary’s and Joseph’s case – nothing is sought after more eagerly than faithful, loving service to the Beloved.  Nihil amori Christi præponere To prefer nothing to the love of Christ (The Rule of St Benedict 4).

There are moments when fidelity comes with a cost: the losing and finding of the twelve year old Jesus, with the accompanying bleakness, perhaps, of discovering anew something more of His otherness.  “Did you not know that I must be in my Father’s house?” (Lk 2:49).  Did you not know that my Father in heaven has the first claim on my life?  Mary expresses the pain of her human heart, yet speaks also for Joseph.  We understand a little of the loneliness of her loss, when we, too, come to realise that fidelity to God trumps our other fidelities.  Simeon, himself acquainted with long waiting, makes no attempt to hide the price of faithfulness.  A sword will pierce her heart; her fidelity will lead to Christ’s passion and death, to deeper loss and to a call to penetrate further into the mystery.

We know from the Gospel that Mary ponders, weighs all these things in her heart.  She practises remembrance and teaches us to do the same.  She helps us to be faithful to the inner meaning of the words of the Gospel, to go beyond the husk and savour the kernel.  Thus we learn how to contemplate the mystery of God incarnate in Mary’s flesh.  This is to contemplate the wholeness of truth; God’s look upon us will then not be blocked by our narrow ways of thinking and looking.  When we look at Him, He returns our gaze and in this mutual regard, we shall be transformed.

Mary’s fidelity to her own destiny enables her to recognise her Son’s.  At the wedding at Cana, she acts as instrument in bringing his “hour” to light.  As some commentators have noted, she fulfils here the rôle of Queen Mother at the right hand of the King.  He will not fail to grant her request.  There is a foreshadowing also of her presence beside the throne of the Cross, and of the day when she will share in His triumph, by her coronation at the eternal feast of heaven.

Another kind of fidelity is shown in her discreet presence during the public ministry.  Even as we see that she had a pivotal rôle in its launching, so to speak, she then steps back, stands at the back of the crowd, accepts that He will not always have time for her.  In embracing the distance, as it were, she gives proof of her deep confidence in His personal love for her.  She is faithful, in other words, to the bond between them, which cannot be broken, even if it cannot always be expressed.

Her fidelity on Calvary is there for all to see.  With a handful of other faithful disciples, she stands by the Cross of her condemned Son, tainted in the eyes of onlookers by the same condemnation.  “It was the will of the Lord to bruise Him”, says Isaiah (53:10); she is likewise bruised.  It was the will of the Father that He should give His life as a ransom for many; she bows to the same will.  In a certain sense, therefore, she offers Him, taking part in His bloody sacrifice by her own interior oblation.  Fidelity to her fiat has led her to this juncture.

Another act of fidelity is then asked of her: the mystical motherhood of John, who stands for all believers.  Behold your son.  Like John, she must remain.  She is not caught up into the cloud at the Ascension; she must stay on earth until the Lord’s call.  However, the word for “remain” at the end of John’s Gospel is the one used for “abide” in John 15.  “Abide in me and I in you” (v 4), “Abide in my love” (v 10).  Less functional than to “remain” or “stay”, it implies a resting close to the breast of Jesus.  It is, therefore, a privileged abiding, as if “under the wings of the Most High” in the words of Ps 90.

Abiding implies a contemplative recollectedness, an ingathering of all thoughts and emotions.  At Pentecost, in particular, we have the impression of a still woman in the midst of wind and fire and ecstatic utterance.  This stillness runs deep and is a fruit of her fidelity. 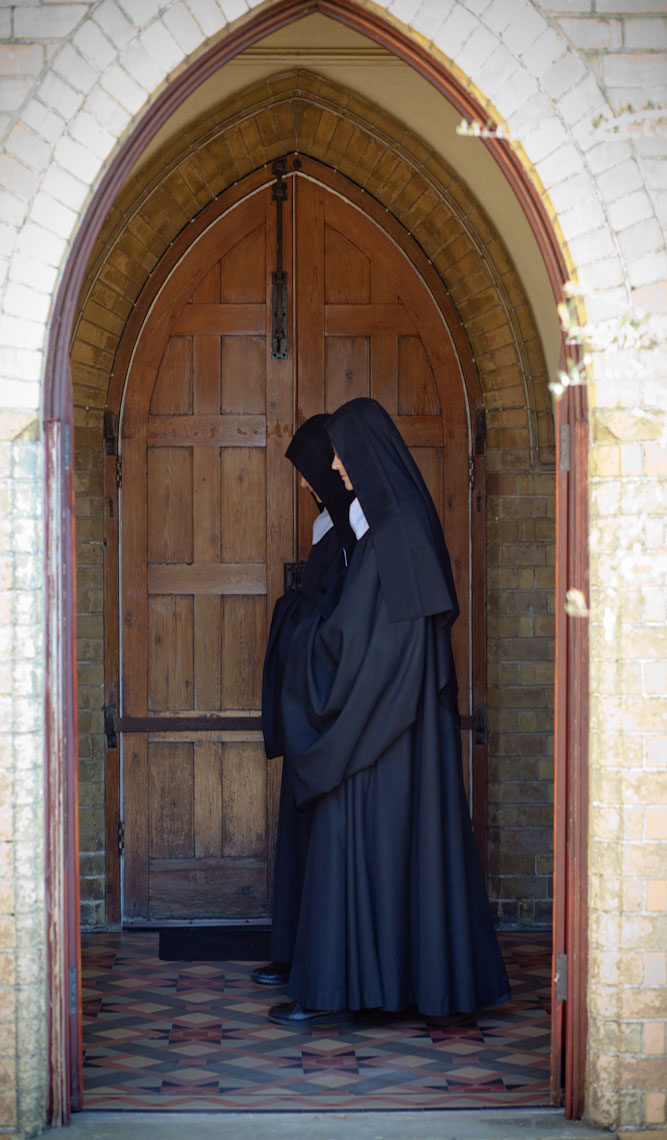 Mary will need this capacity for endurance and patient waiting.  She and John, as we noted, are to remain on earth after the Resurrection and Ascension.  Faithful to the Lord’s will and purpose, they are appointed to communicate the inner meaning of the paschal mystery.  We have John’s sublime Gospel; Mary’s mothering presence.  She must have been able to tell the college of Apostles many things, not only by word of mouth but also by her very being.  So Mary has John; she has the veneration of the believers, the nascent Church.  Nonetheless, a profound loneliness must have been hers, also.  Despite abiding in her Son’s Heart, despite her participation in the mystery of the Lord’s Body and Blood, her own heart remains pierced.  That cannot be reversed, nor would she wish it to be.  A not inconsiderable pain was no doubt caused by the need to descend from immersion in the mystery of her Son’s exodus to the banality of everyday life.  Yet by now she has become prayer itself.  Her thoughts, her actions, her substance are forever turned towards God and interpenetrated by His Holy Spirit.  This is what we ask her to let us become; we ask her aid to persevere; to communicate what we have been taught through our own fidelity, not so much in words as by our silent witness in the cloister.

Thanks to Christ’s ultimate triumph, joy also triumphs.  Our Lady’s Assumption authenticates her fidelity, fulfils her trust and crowns her waiting.  She will sit by the side of the “faithful witness”, God’s Son and hers, for eternity.  Surely she can never forget those still on earth, who strive to be faithful in small things as in great for love of Christ.  She does not find fault with us, although she is without fault.  Rather, she points out to Him the jewel of fidelity in each persevering soul, who has filled her lamp with the oil of charity and kept vigil.  She presents our petitions, cleansed, by her kindly hand of all dross of self-seeking.  The King cannot refuse the Queen of Heaven.  Her advocacy remains, just as her fidelity remains forever.

This website uses cookies to improve your experience while you navigate through the website. Out of these cookies, the cookies that are categorized as necessary are stored on your browser as they are essential for the working of basic functionalities of the website. We also use third-party cookies that help us analyze and understand how you use this website. These cookies will be stored in your browser only with your consent. You also have the option to opt-out of these cookies. But opting out of some of these cookies may have an effect on your browsing experience.
Necessary Always Enabled
Necessary cookies are absolutely essential for the website to function properly. This category only includes cookies that ensures basic functionalities and security features of the website. These cookies do not store any personal information.
Non-necessary
Any cookies that may not be particularly necessary for the website to function and is used specifically to collect user personal data via analytics, ads, other embedded contents are termed as non-necessary cookies. It is mandatory to procure user consent prior to running these cookies on your website.
SAVE & ACCEPT